Rooftoppers has been nominated for the Carnegie 2014 medal.

Rooftoppers is unusual and it is wonderful; the kind of novel that lights you up inside. 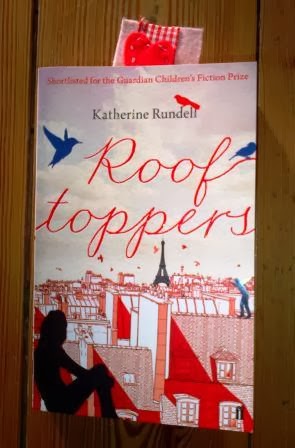 There’s been a lot of high praise for Rooftoppers but the initial story premise didn’t grab me. I pushed the novel towards the front of my review books mostly because of Katherine Rundell’s tweets. I’m glad I did because the book’s as good and interesting as her twitter account.

A baby girl, Sophie, is orphaned in a shipwreck, and found floating on a cello case at sea. Charles Maxim, an eccentric intellectual takes her in, home educates her and battles with social services who think it inappropriate for a single man to raise a girl.  The thing he teaches her the loudest is never to ignore a possible....and so the story opens up.

In Rooftoppers, Rundell combines social observations and criticisms with the beautifully fantastical in a tone that bears charming wit. The imagery she uses is both funny and enchanting and her characters are wholly endearing and I think Charles Maxim, Sophie’s guardian, will sit alongside Atticus Finch as one of my favourite ‘fathers’ in literature. I found delight in nearly every page (though I did raise an eyebrow at the need to include a fight scene – but hey).

Rooftoppers is perfect for slightly older fans of Pippi Longstocking or Frances Hardinge’s character, Neverfell (A Face Like Glass). It’s full of the elements I love to find in children’s fiction and it’s a book I suspect might get passed along the generations.