The Battle of John Dickinson

Usually, we like to think that we sat down for a chat with an author. But this time, we went to war. In his novel, Muddle and Win: The Battle of Sally Jones, author John Dickinson creates a Lifetime Deeds Counter (LDC). It counts things you do as Good or Bad deeds.  We asked John to answer a few questions and be judged by his own criteria. It was up to him to persuade us if he thought there could be an inbetween. This is how it went.....

John Dickinson:
I cook muffins.  I’ve long had the muffin habit, but I didn’t actually start making them until I was writing Muddle and Win.  So it was research, sort of.  I was shocked to discover how much butter and sugar goes into those things.  Now it’s some time since I wrote The End on Muddle, and I’m still making them. A couple of months ago Son and Daughter and I all had exams coming up, and we mainlined on muffins while doing our revision.  Bad in all sorts of ways.  We’ll see on Results Day if our ends justified the means.

You ever played hockey?

John Dickinson:
I went to the sort of school where you played full contact Rugby in all sorts of weather.  So I imagined it as Rugby with clubs.  I’ve also been a touchline Dad while watching my children play it.  The sort of things Windleberry is shouting in that scene get shouted by every Dad on every touchline in the world, regardless of the sport.

John Dickinson:
Ahem.  I am a struggling tenor in a little local choir.  One of the good things about being a tenor, or a man of any description in that sort of choir, is that you practically have to commit murder before they ask you to leave.  One of the less good things is that when the conductor accuses us of a “Stockhausen moment” and looks at the tenors, it’s definitely me he’s looking at.

John Dickinson:
This is true.  Although I sometimes think I only keep the job because the family couldn’t find anyone else to fill it at this wage L

You worked at MOD?

John Dickinson:
Guilty as charged.  I plead the statute of limitations.

You have a cat?

John Dickinson:
Sadly, no longer.  We adopted our two – or maybe they adopted us, because it didn’t feel like it was really our decision at the time – at a cat’s home near Exeter.  They were the ordinary, short-haired black/black-white domestic sort with the personality-surfeit that comes as standard with cats.  They lived with us for seven years and then we lost them both to some mysterious illness that the vets couldn’t help with.   Very miserable, especially those final journeys to the clinic.  I have a feeling that in some future story Sally may find herself doing the same.

John Dickinson:
As a child I read boys’ comics, and girls’comics too. I liked both, although as I remember the boys were about adventures and war heroes and time travel, and the girls were about classroom snobs and the occasional period drama.  Now I’m working three days a week at the offices of The Phoenix, a new story-telling comic aimed at both girls and boys (and everybody who likes comics).  I even write the occasional story in it.

Your last chance...this one's up to you:

John Dickinson:
I’m an accountant.  And if that surprises you – what other kind of creature could have invented the LDC?

In order to help us calculate his LDC, sweet innocents that we are, we did as John suggested. We punched in a six figure number on the calculator, and kept on pressing 'til our fingers dropped off. Now we have bloody muffins!

How would you calculate John's score?

You can read M's review of Muddle and Win: The Battle of Sally Jones here. It is published by David Fickling Books on 30 August 2012. 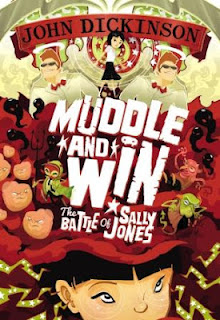