Our first We Sat Down For a Chat post of 2014 is a guest post from Leopold Blue author, Rosie Rowell. Leopold Blue is a charming and vivid coming of age tale set in early 1990s rural South Africa. Rosie Rowell tells us a bit about writing the novel and some unfinished business she has with it....

Leopold Blue took a long time to write. As a story it took ages to settle, and once it had I was slow to write it. It started as an escape from my very real world of three children under the age of three and a soother of my homesickness.Then the place and the characters became so real to me that I felt it my duty to tell their stories, to allow them a life outside my head. Seeing the book in print makes me very proud, both for myself and the characters.

One reaches a point at the end of writing and editing a book when you have to let your characters go, if for no other reason than to make room for the others that are waiting to move in. Now that I am fully engaged with the troublesome characters in my next book, Leopold’s characters are like treasured but distant friends. All except for one – Simon.
He pulls at me. I can best describe it as a nagging sensation, similar to an outstanding bill that one keeps remembering about in the middle of the night. On a number of occasions I’ve caught sight of him out of the corner of my eye.

My friend reminded me recently about an occasion about two years ago. We were doing a charity walk along the Thames, starting at Hampton Court and ending up at Battersea Park. It was a lovely opportunity to chatter uninterrupted by phones and kids and husbands. Apparently half way through, I stopped dead and turned around. Our conversation went along the lines of –

I’ve seen him in a shopping mall; I’ve caught sight of him in the arrivals hall at Cape Town airport. The recognition can so fierce that I have to stop myself from approaching these unsuspecting strangers. I generally dismiss it as a side-effect of being a writer, of being permanently caught between the ‘real’ world and my internal (and often preferred) canvas. It is also common to fall in love a little bit with your characters and that crush is difficult to give up.

And yet, I do feel that Simon’s story is yet to be told. He is subtle; he is a watcher. It is difficult to make him talk. I’ve been surprised by glimpses of his anger, both at the situation he was born into but also towards Meg and her family. The final chapter of Leopold Blue is in my mind Meg handing on the baton to Simon. At the very end Meg recognises that Simon’s story is an extraordinary and brave one, one that I hope one day he will trust me to tell. 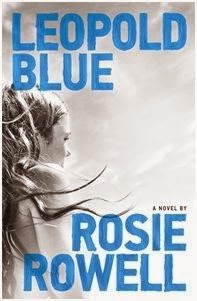