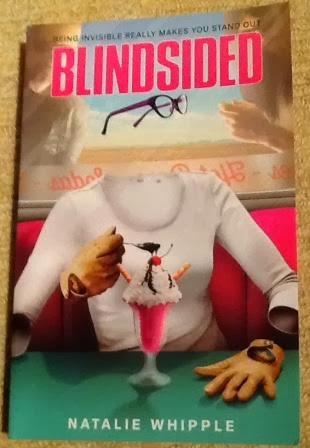 This is the sequel to Natalie Whipple's Transparent. Fiona McClean is a daughter of one of the most famous syndicate gang leaders. However, she is not normal like most girls. She is invisible. No one can see her and she can't even see what she looks like. A drug was made which gives humans mutant powers. In Fiona's case, she is invisible. This drug can also be given to enhance their abilities, this is where the syndicates comes into play. This time Fiona and her pack (gang) need to stop her father, the army and another syndicate from recreating this drug because the missing element has now been found.

I really liked both novels so much. Fiona really is a headstrong character.  However, my favourite characters must be Miles and Spud. Miles is Fiona's brother who has the ability to let off scents. Some are fruity others could be eggy. He can be quite funny but he is also mega protective over his sister and girlfriend, Spud.Spud is the infamous hacker who is on most of the syndicates kill or wanted lists. She is hilarious once she has hacked into something and her presence just really grew on me.

The Hot Key ring on this book says Blindsided is:

Overall I really enjoyed it and I read on the 24 hour readathon.