Welcome to the next stop on the Red House Children's Book Award 2014, an award where children get to do the voting. We've a special guest post from Rick Yancey about the origins of The 5th Wave!

The Origins of The 5th Wave
- guest post by Rick Yancey 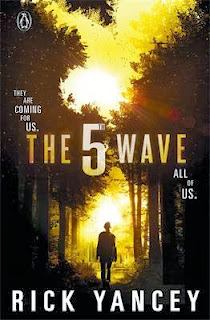 A few years back, I asked my wife to describe her greatest fear. Without hesitation, she said, “Aliens!” This sparked a long discussion that lasted long into the night. Why aliens? My own view (and why aliens didn’t even make my top ten of things-to-keep-me-up-at-night) was our species would most likely never encounter a civilization from another planet for several reasons, the chief being the vast distances between planetary systems. In other words, why bother? Time passed, as time does, and I ran across an interview with the physicist Stephen Hawking, who stated his personal hope that aliens never find us, believing the results of an encounter would be disastrous – for us. That remark got my creative juices stirring.

What if our popular culture, books, film, TV, got it all wrong? Wasn’t it true that for over a hundred years we’ve been imagining the “safe” aliens, the kind of aliens we would like to attack us? What if I wrote a story about the kind of aliens who most likely would?
There is only one reason they might hazard an interstellar journey: to find a new home. Just as our planet will one day die, so would theirs.
So imagine you’ve picked out a new home. Before you move in, you discover your beautiful new abode is infested with vermin. What do you do? Do you say to yourself, ‘Oh, these are disgusting creatures with whom I’m completely incompatible, but I’ll live with them anyway, despite the fact they won’t like it and do all in their power to make my life miserable?” Or do you call in the exterminator to cleanse the place of the pests?
That was my starting point of The 5th Wave. To a species thousands if not millions of years more advanced than ours, we would be nuisances and pests. The idea of the waves begins with the fact that our species numbers in the billions and is spread out over every continent. They would do all in their power to preserve the earth – to do as little damage as possible. Each wave is designed to whittle down the human population without permanently damaging their new home.
The 5th Wave is, of course, more about us than them. More about what remains than what’s destroyed. My first image of the story was of Cassie, my heroine, trapped, injured, terrified, and certain that no matter what choice she made – run or hide, fight or flight – she was doomed. Her quest to find her brother – the human bond – keeps her going, because that would be the fundamental thing after everything else has been taken away. As Cassie realizes, the only way to rid the earth of humans is to rid humans of their humanity.


To help you make up your voting mind, go and find out more about the books that have been shortlisted. Check out the rest of the Red House Children’s Book Award blog tour.