Vortex is the second book in S.J Kincaid's WWIII trilogy (there are spoilers for the first book, Insignia, in this review; you can read M's review of Insignia here). The novel is set in World War 3. The war takes place in space, but no one gets hurt because they control the ships by computers that have been put in combatants’ brains. 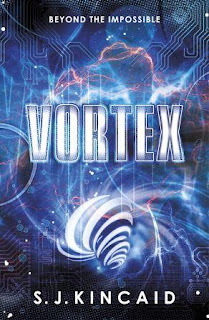 Tom Raines is the main character who has completed his Pleb training as a combatant and has now moved up into Middle section. Tom's best friends Vik, Wyatt and Yuri all train together but because Yuri is a suspected spy for the Russians, he has to stay as Pleb till more has been found out about him.


As they train they must also try and get sponsors, though Tom can't quite mange that. Then when one of the big companies asks Tom to do something for them, they promise him that they will make him a combatant but if he doesn't do what they want, they will tell all the other companies that they shouldn't sponsor him. This will leave Tom with not many choices after he has finished training.


I really liked the novel because I found the way people could control ships in space via a computer in their brain, very exciting. Though I think the first one, Insignia, is better but Vortex is still very good!


There are many subplots in the book but one that stands out for me is the relationship between Tom and Medusa. I think it is very cute but also it shows that no matter what side of the war they are on they still like each other.


I would say this book is for teens or older, I think this partly because there are some aspects that some people may not understand and also because the main character is around 14, 15 and he does what 14, 15 year olds do.
Publication details: 4 July 2013, Hot Key Books, London, paperback
This copy: digital proof received from the publisher for review