Liar & Spy is like a stand-alone twenty-first century and urban version of The Secret Seven but written in a stylised John Greenish voice for tweens with the warm depth of David Almond or Patrick Ness. This novel is everything that it looks like on the cover – and a whole lot more.


The central storyline belongs to Georges, a boy who’s moved into a block of New York apartments and becomes involved in an intriguing Spy Club. But it cleverly and pleasingly draws together multiple mysteries and threads from other characters’ lives too. 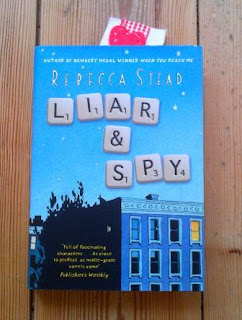 I enjoyed a connection with most of the characters: Georges is immediately and wholly endearing, his dad should learn to cook, his mom is wise and hardworking, Candy is delicious (‘though is she a bit too clever for her age?), Safer’s mom is cool, Bob English Who Draws wants new spelling rules and so on and so on. Safer – well, you’ll have to make up your own mind about him. If I was a fan-fictionista, I’d look forward to many more tales of either The Spy Club or the Blue Team...dot...dot...dot (this’ll make much more sense if you’ve read the book!).


The writing is good and smooth. The scenes are interesting and clever. The characters are warming. There are funny bits. It’s the kind of book readers will go back and read again – to savour some of the delights (umami!) or re-check for clues they missed. Tissues may be required for some readers (probably those of the adult sort). If you find that the first few chapters seem a bit slow and leave you wanting something more, like suspense or anticipation, press on because the whole becomes beautiful. Georges’ mother would probably say it has things in common with a Seurat masterpiece. I highly recommend it.


Fans of either Enid Blyton’s Secret Seven series, A Monster Calls (Patrick Ness), My Name is Mina (David Almond), The Treasure House (Linda Newbury) or pointillism in art will probably find some aspect of charming delight in Liar & Spy. And if you’re 8, 9, 10, 11 or maybe even 12, and you enjoy this novel, you may well go on to enjoy John Green’s novels when you’re a teen.


Pssst...don’t leave until after the credits, you never know what will happen.