The Silver Sword by Ian Serraillier

Guest Review by Nanny Bee
(with an extra pic at the end!!!)

The Silver Sword is a lovely book with a good adventure story. I think this edition with the Backstory section is brilliant.

The Silver Sword is based on, or inspired, by some true stories from World War II.  It is about three children – the Balickis - whose parents disappear in the second World War. They meet a little orphan boy, Jan, who has a paper knife shaped like a silver sword. He is scruffy, roams the street and thieves.  The three Balicki children recognise this sword as their father’s and realise that he might still be alive. The Silver Sword is all about their adventures on their journey through to Switzerland looking for their father. It takes a few years!

I was impressed by the bravery shown by the three children in deciding to escape from the Germans to go and look for their father in Switzerland. Jan goes with them. I wondered if he would fit in with them or be a nuisance. He was a bit of a nuisance but he also helped them.

The Silver Sword was first published in 1956. Unlike some of the critics then who thought that it was unsuitable material for children, I think it is suitable for children. It gives them an insight into what children had to go through in the war in Europe. I think it would appeal to most children in that even though the characters were being persecuted and it was war, the story isn’t told in a gory or frightening way. The story is told in a way so that children wouldn’t get scared. The story is written well. It is straightforward and you want to read it. After each chapter, I wanted to get onto the next chapter to see what had happened to the characters.

This edition has nice little drawings at the beginning of each chapter. And there’s a map at the front which is good. It shows their whole trek. I liked the Backstory section because it was interesting. It has some facts, a bit by the author’s daughter talking about her father and a character list for the story. I did the quiz and didn’t do badly (hahaha) – I got the extra difficult question correct! And there are instructions to make your own treasure box.

Note from M: this review was dictated to me by Nanny Bee. She pretty much read the whole of the Backstory to me she enjoyed it so much!

This copy: received for review from the publishers


Here's an Imperial War Museum postcard inspired by The Silver Sword. It's illustrated by Mel Northover and was bought at the Once Upon A Wartime exhibition in Manchester. 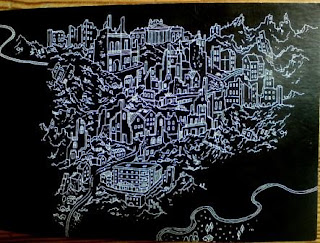 Book Giveaway!!!
UK residents -today is the last day you can enter to win a copy of The Silver Sword (or any other title from the Vintage Children's Classics range). Closes 12pm.
Posted by M at 12:00:00 am