Illustrator Victo Ngai and The Time Out of Time Cover

It's blog tour time! Illustrator Victo Ngai talks us through designing her eye-catching cover for the first book in Maureen Doyle McQuerry's Time Out of Time saga. Ngai has been named one of Forbe's 30 Under 30 for Outstanding visual artists. Victo is short for Victoria and she often illustrates covers for the New Yorker. 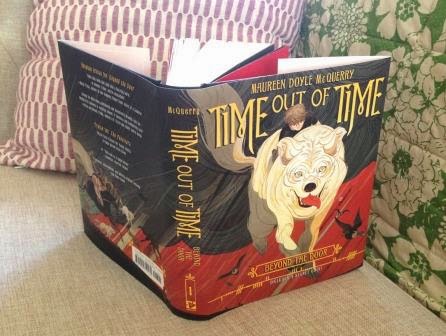 Time out of time
the horned man rides
with the forest queen,
the greenman dies,
the heavens bear witness,
the great wolf flies
and Timothy James stands alone.

I have been working on a new book series called Time out of Time by Maureen Doyle McQuerry. Book 1 Beyond the Door has just come out!


Time out of Time is an imagination packed fantasy story which draws inspiration from Celtic mythologies. Our hero is a shy bookish boy named Timothy who is fairly certain nothing interesting will ever happen to him. However, everything changes on one dark spring night. A mystery knocks on his door and starts revealing his role in an ancient prophecy…

Choosing a moment from a book as cover is always a fun challenge. It has be a true representation of the story without spoiling the plot, while being visually stimulating. I decided to go with the Wild Hunt because:


a) There’s a giant golden flying wolf, who wouldn’t like that?


b) We introduce our main character - Timothy.


c) The chase set the stage of adventure and the storm set the mood of danger.


d) It’s a perfect moment to show the parallel existence of Timothy’s ordinary world and the fantastical world “beyond the door”.


This art has been featured on the American Library Association Booklist cover, what an honor!

Big thanks to Maureen McQuerry for this great story, Chad Beckerman and Editor Howard Reeves for all the great input.

I hope you would enjoy the book as much as I do!
Don’t forget to decipher the secret code which comes with the book!

******
Thanks to Victo Ngai for this. I love that cover!
Time Out of Time: Beyond the Door by Maureen Doyle McQuerry is published in the UK by Abrams.


Next stop on the tour - Serendipity Reviews on 16th June.