I read Rebecca when I was a young teenager and loved it. It’s down as a reread for me and number five on our original Classics Club list of fifty. But, I’d never owned a copy so I bought it. It came as part of a Virago Modern Classics’ du Maurier bundle that included Jamaica Inn. 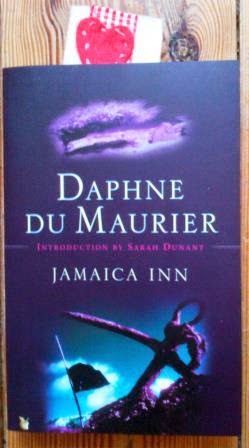 So, instead of a Rebecca reread, I started Jamaica Inn, not sure if it would be my sort of read (whatever that is!). I flitted between it and a number of other books (mostly review copies that I felt obliged to prioritise). Then, I saw a television trailer for a forthcoming BBC adaptation of it. This also prompted a renewed media interest in the ‘literary’ legacy of du Maurier with some sides hailing her as a popular and iconic storyteller while others question her literary merits. Remembering that my working definition of ‘classics’ is written stories that carry across generations (for any reason), my Easter reading plans were altered.


Jamaica Inn is a gothic romance which isn’t typically my sort of thing for all sorts of reasons (but mostly because of unhealthy gender relationships), so I haven’t read many. You realise from the first few pages of Jamaica Inn what you’re in for: an ever darkening story in an ominous setting with some nasty characters – but surprisingly some lovely ones too.
Twenty-three year old Mary Yellan’s mother has died and she has moved to live with her aunt Patience who lives at Jamaica Inn with her violent husband, Joss Merlyn. Nobody stops at or visits Jamaica Inn and something sinister, criminal and maybe even evil is going on. As a murderous story about smuggling cartels unfolds, Mary struggles with her own inner conflicts about trust, loyalty, gender and romantic feelings for an awful man.


As a gothic romance, Du Maurier’s writing  gets the balance right. Jamaica Inn is chilling and dire without being horrificly graphic, and there's a not-too-sweet dose of a properly infuriating romance too. While Jamaica Inn’s story is generally predictable (but other reviewers say differently!), the final pages surprised and ultimately disappointed me (more thoughts on this below because of spoilers).


From a gender perspective, Jamaica Inn is interesting. The roles of men and women, while mostly taken for granted (the setting is the 1820s), are also speculated about particularly by Mary Yellan and possibly by Jem Merlyn (the writing/publication is 1930s). This is also enhanced by contrasting parallels between the behaviour and gendered demeanours of Joss and Patience with those of Jem and Mary. Patience is acutely passive and scared witless in contrast to Mary Yellan who is headstrong and determined, but blames much that is wrong with her life on being a woman (of course, there is some truth in this). Because of this, she connects personal independence with being a man (some things still haven’t changed) and she anguishes about gendered identities, emotions and bodies.


Classics Verdict: Gothic romance still isn’t doing it for me but  it's growing on me. Du Maurier’s novel is convincingly atmospheric and much better done than the BBC’s television adaptation. Would I unhesitatingly recommend it to the next generation? For me, it’s not a must read but for readers who enjoy this sort of thing, perhaps yes. Also, it reminded me that at heart, I am a bit of a romantic.

The ending confused me and either I’ve missed something or the characterisation was a bit off. For much of the novel, Jem seems besotted with Mary and makes some big decisions and sacrifices for her sake. Why then does he stubbornly thwart her? Does he think that putting her off is actually better for her because he is not able to give her what he thinks she will want? And then, when she gives up her wish to return home in order to accompany him, why does he not change his direction and concede that to her? Is this about gender power relations and maintaining the masculine status quo for Jem? Is this about Mary giving in to her body’s ‘weakness’ or about choosing what she wants for herself? Is it about a dark cycle of bad relationships taking Mary down a similar path to her Aunt Patience (or is Jem much more wholesome than Joss – and will he remain like that)? I'd have gone with Jem.
End of spoiler!


I finished reading Jamaica Inn minutes before I watched the recent BBC adaptation. I don't think I've ever been so freshly close to as text as this when viewing a screen adaptation. That may have influenced my response to the BBC's version, but many important plot and characterisation elements were changed to the extent that much of du Maurier's Jamaica Inn was lost. The novel is far more subtle and explores Mary's conflicts in much greater depth. I much preferred du Maurier's novel.