Stoner is a wonderful, wonderful read. Some people should expect to receive it as a Christmas gift (how do you that emoticon wink thing?).


Originally published in 1965, it has been heralded as one of the less-known or forgotten classics, has been recently republished in the USA and now, in the UK, by Vintage Classics. 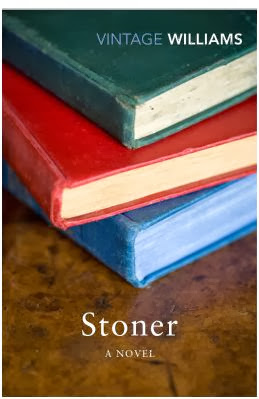 The plot, to many people’s ears (including mine), will sound drab. The novel tells the story of William Stoner’s relatively unremarkable life as a university teacher of English (although this particular turn of events for a rural American farmer boy is interesting in itself; and he lives and works in some awful conditions). It is a linear narrative told in the omniscient third person, so no textual games here.


But this novel is remarkable. From the opening page, I couldn’t put it down. There was excitement and tension in the deeply brutal interpersonal conflicts that assuage Stoner’s marriage and professional life but there is also fantastic characterisation, particularly of Stoner. More than any other character I’ve read in a long time, you immediately and wholly sink into William Stoner’s being; and it so quietly and humbly mournful (yet in a strangely uplifting way?!).


Thematically, the novel explores the work ethic, love (in the most unsentimental of ways), fitting in and literature.


John Williams proposes the notion that the university is a refuge from the rest of the world and explores this beautifully and painfully through a variety of characters. For those of you who have any familiarity with ‘mad professors’, Stoner is definitely worth a read! For those who don’t, the notion of refuge has broader appeal and significance too.


In many ways, the novel is also a reflection on a life and the different stages and moments that it goes through.  In this case, the life is Stoner’s, but his own introspective thoughts again mimic the kinds of general ‘life’ thoughts many Western people might experience. It would be interesting to see how people at different age stages in their lives respond to Stoner and whether they all enjoy it equally well: maybe at 20, 40 and 60?


Some interesting debates about the representation of gender and disability in the novel played through my head while I was reading it. There’s his wife, who might be described as a damaged femme fatale, and there is Lomax, doubly damaged by his disability. Taking into account a) American society at the time of the plot, and b) American society at the time of the novel’s writing, these issues in the novel are clearly raised by the author and they’re not clear cut.


Other people have commented on the novel and its relationship to ‘literature’. This runs strongly and frequently throughout the novel, but it wasn’t the aspect that interested me the most (I was the kind of English student who would have had Stoner in complete despair!).


Classics Club Challenge Verdict:
Not originally on my Classics Club challenge list (as I’d never heard of it), is it a classic for me? Yes. I would highly, highly recommend it to most readers. It would be a fabulous novel for book group chats.


Much in Stoner’s life is excruciating: his home life, his marriage, his work schedule. The author lays this on pretty thickly, especially after the birth of Grace. For example, there’s a section where Stoner is described as having to be more a mother than a father. Taking into account the gender context of the time (like note too how few references are made to female students or academic staff), his life can’t really get much lower than that – he’s doing everything. At this point, however, I start to think that the narrator is perhaps a bit more unreliable than usual and this is suggested even further in the closing pages of the novel where Stoner feels that he was partly to blame for Edith’s behaviour. Maybe Stoner wasn’t quite as easy to get along with at home as is suggested (though on the whole, I think the balance is definitely in his favour).

Publication details (this edition): Vintage, London, 2012
This copy: digital copy received for review from the publisher