Moral Disorder by Margaret Atwood
Reviewed by M
I don't read short stories very often. Sometimes they're too intense and often smack me in the face or punch me in the gut. I can't take much of that. But sometimes, they deliver a slow burn. Whether they burn bright all the way through or fizzle slowly out at the end is something else. A bit like life. 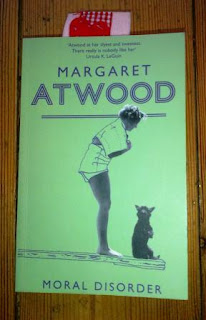 Moral Disorder  reads as a slightly jumbled life story and confused me. I couldn’t decide if it was a collection of short stories or a life story about Nell written as a collection of chapters that could work independently as short stories. As a life story, I’m sure there were some small anomalies – like number of siblings, ages, and naming Nell (person and a horse). Of course, many of the chapters had been previously published in separate periodicals as short stories, so.... But the arrangement in Moral Disorder suggests something more interlinked.

Perhaps if I'd read Moral Disorder as short stories and mixed the reading order up rather than progressing from front to back, I wouldn’t feel this way. Currently, I feel like I’m forcing something onto the collection, willing it into being a cohesive novel, which is something that it doesn't really attempt so can't deliver (unlike Snapper which was intended as a novel and clearly is because it’s relatively linear). But, if I hadn’t read Moral Disorder from front to back, that would have messed up the chronology that does seem to follow in the chapters on Nell and Tig at the farmhouse. As short stories, many of them are a delight: The Boys at the Lab is perhaps my favourite.
But, did I enjoy it? On the whole, yes. Like Snapper by Brian Kimberling, I dipped in and out, happily picking it up to read over a period of months. As a life story, Moral Disorder runs through birth, death and everything inbetween often reflecting on themes of family, belonging, identity, growing up, being a woman, and being ‘other’. Set in Canada, the stories also convey a strong/atmospheric sense of place.


The voice in Moral Disorder bears many similarities with The Edible Woman – quietly humorous and possibly hallmark Atwood (note: this is the probing but not the speculative fiction Atwood). The narrator for each story, whether it was Nell or someone else, always sounds slightly detached from events and gives the strong impression that, unlike those around her, she’s on an even keel – even when her stories suggest that balance is not always possible and is often teetering. Of course, they’re retrospectively narrated so I suppose that enables an emotional and rational distance for the narrator.


This wasn't my favourite Atwood but I think I'm developing a taste for short stories. If you like the slow burn and a keen sense of humour, either Moral Disorder or Snapper could be a good place to start.

A small spoilery aside:
Was Gladys’s death necessary? Does it add anything to the White Horse story? I’m not sure what it is, but there’s something going on here. There’s a photo of a fat white horse at the beginning of this edition, and a usually dependable horse call Nell appears in the final story.


Publication details: 2007, Virago, London, paperback
Originally published: 2006
This copy: my own; bought for me as a birthday gift from Daddy Cool as part of my mission to collect Margaret Atwood's entire works of fiction (so far, I have 11 ).
Posted by M at 3:26:00 pm